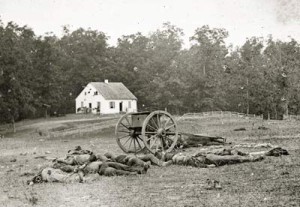 The Church of the Brethren started in Germany in 1708 as part of the Reformation tradition that believed in adult baptism. Because Brethren immersed believers three times (“…in the name of the Father and of the Son and of the Holy Spirit…” Matthew 28:19), they were given the nickname “Dunkers”. They were also called German Baptist Brethren. Later they took the name “Church of the Brethren”. We share a common origin with several other Brethren groups (the Brethren Church, Grace Brethren, and Old Order Brethren). Our spiritual ancestors chose to combine the strengths of Anabaptism (which we share with Mennonites) and Pietism (which we share with Moravians).

Because of persecution for their faith, the first Brethren fled from Europe to the colony of Pennsylvania. From there they migrated south and west, coming to the Carolinas in the latter part of the 18th century.

During the bloodiest day of the Civil War, at the Battle at Antietam in Maryland, the conflict swirled around a little Dunker Meeting House. The Brethren farmers nursed wounded soldiers on both sides.

Brethren in both the North and the South were opposed to slavery. They were also opposed to serving in the armies of the Union or the Confederacy. For them following the Prince of Peace meant they should love their enemies, as Jesus had taught. Quakers, Mennonites and Brethren came to be called “historic peace churches”.

When the Brethren came to North Carolina they settled mainly in the northern and western parts of the state. Only recently (1996) was a Church of the Brethren planted in the Charlotte area, in Concord.